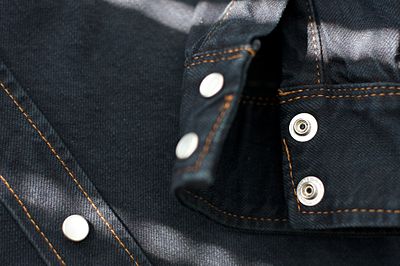 Why Jeans are White on The Inside

Ever wonder why denim jeans are white on the inside but colored (usually indigo) on the outside? This is due to the fact that only the warp fabric is dyed, while the weft fabric remains while. So when jeans are produced — with the weft fabric being used on the interior — it creates this phenomenon. Keep in mind that some companies dye both the warp and weft fabric, but you’ll generally find that most jeans only have the warp fabric dyed.

Unless you’ve worn a pair of stretch denim jeans before, you might be surprised to learn just how “stretchy” they really are. According to some reports, a typical pair of stretch jeans has up to 15% greater elasticity than non-stretch denim. Stretch denim contains a small percentage of spandex (usually about 3%) to give it this unique characteristic. Even though it looks like standard denim, the presence of spandex allows it to stretch far beyond its normal capabilities.

Jeans Were Invented in the 17th Century

It’s unknown who exactly was responsible for inventing denim jeans. Some people have credited Levi Strauss with this accomplish, but the general belief is that he didn’t invent the jeans. Instead, historians believe jeans originated out of France during the 17th century. This was a time when textile production was booming, and denim seemed to be the most popular choice of fabric for pants. The trend continued, and even spread through nearby countries, at which point denim jeans become the staple choice of pants for both men and women.

Jeans are Often Distressed Before Being Sold

Ever wonder how some denim jeans achieve a worn-in look? Also known as distressed denim, this is usually created through various techniques that involve beating the denim with rocks. It may sound a little unusual, but it works surprisingly well. After the denim has been distressed, it looks worn-in and used — a look that many people actually prefer.

Some Jeans are Pre-Shrunk

Yep, some jeans like the Levi’s 501 are pre-shunk during the production process. Normally, denim shrinks a small amount when placed in the washing machine. By pre-shrinking jeans before they are sold, however, it prevents this from occurring.

Know any other fun and interesting facts about denim jeans? We’d love to hear them in the comments section below!