Why Do Jeans Have a Leather Patch on the Back? 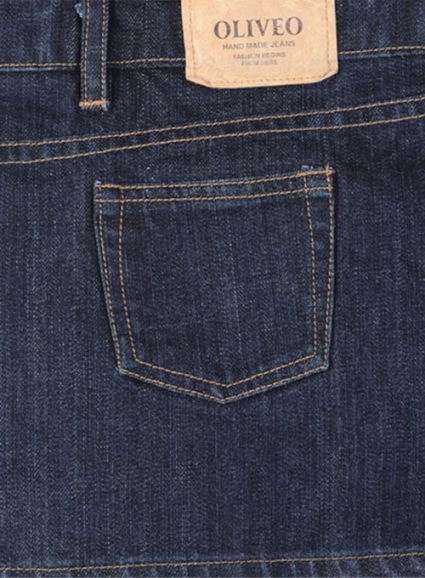 When putting on a pair of jeans, have you ever noticed the small leather path on the back? Whether it’s a generic or designer brand, most jeans feature a single leather back. As shown in the photo above, it typically features the brand name. Considering that it’s just a label, though, you might be wondering why so many jeans feature this characteristic leather patch.

There’s actually a name for the leather patch found on the back on jeans. Known as jacrons, they’ve been around for over a century. Research shows that Levi was the first denim brand to begin using jacrons on its jeans. In the late 1800s, the U.S.-based denim brand introduced jacrons in its denim overalls. Shortly thereafter, Levi began using them in its jeans.

While Levi continues to use jacrons in its jeans — even after more than a century later — it’s not the only brand that uses them. Jacrons have become synonymous with brand-specific jeans. You’ll find them on nearly all brands of jeans. Even small, lesser-known brands, in fact, use jacrons on their jeans.

What Is a Jacron?

The term “jacron” refers to a small rectangular- or square-shaped patch found on the backside of a jeans’ waistband. Even if you’re unfamiliar with them, you’ve probably come across jacrons when shopping for jeans. As previously mentioned, nearly all denim brands use them in their jeans.

In the past, jacrons were made exclusively of genuine leather. You might be surprised to learn that it was the only part of jeans made of leather. Jeans, of course, are comprised mostly of denim, which is a form of cotton with warp-faced weaving. Back in their early days, though, jeans featured a jacron made of genuine leather.

Genuine leather, of course, is more expensive than faux leather as well as various blended synthetic materials. It’s also more vulnerable to damage when exposed to water. You can’t safely wash genuine leather in water — at least not without risking water damage. As water soaks into the genuine leather, it can lead to mildew or other related problems. Therefore, most denim brands have since transitioned away from genuine leather for their jacrons.

For a better understanding of what a jacron looks like, take your jeans and flip them over. Next, inspect the waistline, at which point you should discover a brown patch. This is brown patch, which is usually square or rectangular, is the jacron. It usually features the name of the denim brand as well as other identifiable brand information, such as the year in which the brand was founded. Jacrons can fade, but most of them will remain visible for many years or even decades.

Why Jeans Have a Jacron

Many people assume that jacrons are aesthetic and used strictly to enhance the appearance of jeans. They are found in the waistline, so they are usually visible. With a jacron, your jeans will stand out by defining your midsection and breaking up the otherwise universal color in which your jeans are made. But there are other, more practical reasons, for jacrons.

When jacrons first appeared during the late 1800s they were used to protect against counterfeiting. Even back then, counterfeiting was a common problem faced by denim manufacturers. Nefarious businesses would replicate the jeans of reputable denim brands, essentially selling knockoffs under their brand names. Consumers would think they were buying jeans from a reputable denim brand when in reality they were buying knockoff jeans.

The use of jacrons emerged during the late 1800s as a way for reputable and legitimate denim brands to protect against counterfeiting. At the time, denim brands made their patches out of genuine leather, so nefarious businesses couldn’t easily replicate them. The jacrons also featured the brand name stamped into them. This stamping process required a special tool that most businesses, especially nefarious businesses looking to counterfeit jeans, didn’t possess.

How to Care for a Jacron

If your jeans have a jacron, you might be wondering to care for it. The good news is that jacrons don’t require any extra work to clean, maintain or otherwise care for. You can simply follow the manufacturer’s instructions without worrying about the jacron.

Since it’s found on the waistline, the jacron may rip or pull away from the denim material to which it’s attached if severely stretched. If your jeans get tangled up in the washing machine, for instance, there’s a small chance the jacron may snag. Therefore, some people prefer to wash their jeans inside out to protect the jacrons from damage. If you wash your jeans inside out, the jacron will be concealed. As a result, it shouldn’t snag on anything inside your washing machine.

The small patch found on the back of a typical pair of jeans’ waistband is known as a jacron. Jacrons have been around for over a century. During the late 1800s, they emerged as a way for denim brands to protect against counterfeiting. Over the years, jacrons have become synonymous with jeans, so most denim brands continue to use them.