The ABC of Denim Jeans: 7 Terms You Need to Know 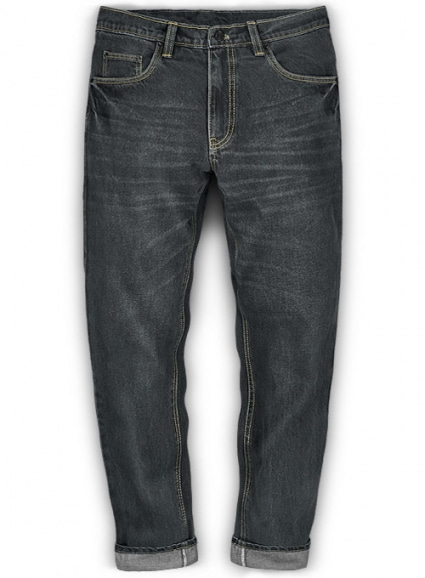 How many pairs of denim jeans do you own? Chances are it’s probably a lot. Since being introduced in the late 1800s, they’ve quickly become the world’s most popular type of pants. Constructed of cotton with the weft passing below multiple warp threads, denim jeans are incredibly strong yet also soft and comfortable. These qualities make them an attractive choice among men and women of all ages.

When researching jeans, however, you may come across some otherwise unusual terms. It’s difficult to shop for jeans if you aren’t familiar with these terms. As a result, we’ve broken down some of the most common jean-related terms and their definitions.

Also known as a riser, a yoke is a V-shaped area on the backside of the waistband. It’s designed to create curvature while also adding structural support. With that said, not all yokes are the same. Some jeans have a shallow yoke, whereas others have a deep yoke. Some jeans are even made with a double yoke. The double yoke jeans sold here at MakeYourOwnJeans, for instance, feature two V-shaped areas on the backside of the waistband. The presence of two yokes essentially doubles their effects. Regardless, a yoke is a section of denim that’s shaped like a V.

You may discover that some jeans have whiskers on them. What are whiskers exactly? They are basically pattern marks consisting of thin lines. They are called “whiskers” because they look like the whiskers of an animal, such as a cat. Whiskers are usually found around the thighs, knees and/or middle. They extend radially to create a worn-in appearance.

Whiskers can be artificially added to jeans during production, or they can occur naturally to jeans over time. Many manufacturers add whiskers using methods such as stone-washing. Just wearing a pair of jeans, however, will often result in the formation of natural whiskers. Frequently wearing a pair of jeans will create age spots like whiskers, which can add character to them.

All jeans are made with fasteners known as rivets. Rivets aren’t the same as buttons. You’ll find either standard buttons or zipper on the fly of jeans. Rivets, on the other hand, are found throughout the seams of jeans. Jeans contain multiple pieces of denim that are joined at a seam. A seam, by definition, is a textile joint where two or more pieces of fabric are joined.

Because seams join multiple pieces of fabric, they often require reinforcing to protect against damage — and that’s what rivets are used for. Denim manufacturers install rivets at the seams of jeans. Consisting of metal snap-like buttons, they hold a seam’s material together.

Most people can’t tell the difference between standard jeans and stretch denim jeans simply by looking at them. If you feel them, though, you’ll notice that stretch denim jeans are more elastic. This is because they are made of an elastic material, the most common of which being polyester and lycra.

Below are some of the top benefits offered by stretch denim jeans:

Rise is a measurement that refers to how far up or down your waist a pair of jeans sits when worn. It’s typically calculated by measuring the top of the waistband (from the backside of the jeans) to the middle of the crotch. Some jeans have a 7-inch rise, whereas others have a 10- or 12-inch rise.

There are low-rise, medium-rise and high-rise jeans. Low-rise jeans have the shortest distance from the top of the waistband to the middle of the crotch. High-rise jeans, on the other hand, have the longest distance between these two areas. Mid-rise jeans, of course, have a moderate length. The distance between the top of the waistband and the middle of the crotch determines where the jeans will sit around your waist when worn.

Raw denim simply consists of denim that isn’t washed during production. When manufacturers make jeans, they’ll use one of two types of denim: raw or washed. Washed denim means the denim was submerged or bathed in a tub of water. Raw denim is the opposite of washed denim. It’s not washed or otherwise submerged in water during production.

Most jeans have don’t have hemmed legs. Instead, the bottom of their pant legs are left open. This means they are more susceptible to damage if you allow them to drag on the ground. If your jeans extend past your feet, for instance, they’ll probably drag on the ground. Over time, this can cause them to tear and fray. Selvedge jeans are virtually immune to such damage because they are hemmed at the bottom of the pant legs.